The district Four Chaplains Ceremony will take place at American Legion Post 295 Middleburg Virginia February 6th, and will be led by District Chaplain Robert Yowell (yowellrobert@yahoo.com). The ceremony will commence at 2pm. All District Legion Family Chaplains are encouraged to take part in this ceremony which chronicles the four chaplains who were aboard the S.S. (USAT) Dorchester.

The ship left New York on January 23, 1943, en route to Greenland, carrying approximately 900 others, as part of a convoy of three ships escorted by Coast Guard Cutters Tampa, Escanaba, and Comanche. During the early morning hours of February 3 the vessel was torpedoed by the German submarine U-223 off Newfoundland in the North Atlantic. The chaplains helped the other soldiers board lifeboats and gave up their own life jackets when the supply ran out. The chaplains joined arms, said prayers, and sang hymns as they went down with the ship.

The impact of the chaplains story was deep, with many memorials and coverage in the media. Each of the four chaplains was posthumously awarded the Distinguished Service Cross and the Purple Heart. The chaplains were nominated for the Medal of Honor, but were found ineligible as they had not engaged in combat with the enemy. Instead, Congress created a medal for them, with the same weight and importance as the Medal of Honor. (excerpt from Wikipedia) 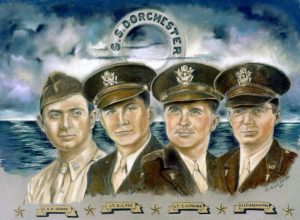