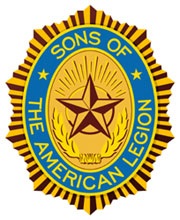 The Sons of the American Legion (Sons or SAL) was founded in 1932.  The Sons exists to honor the service and sacrifice of Legionnaires.

Sons members include males of all ages whose parents or grandparents served in the U.S. military and were eligible for American Legion membership.  Although the Sons has its own membership, the organization is not a separate entity.  Rather, the SAL is a program of The American Legion.  Many Legionnaires hold dual membership in the Sons.

The Sons organization is squadrons at the local level. A squadron pairs with a local American Legion post; a squadron’s charter is contingent upon its parent post’s charter. However, squadrons can determine the extent of their services to the community, state and nation. They are permitted flexibility in planning programs and activities to meet their needs, but must remember Sons mission: to strengthen the four pillars of The American Legion. Therefore, squadrons’ campaigns place an emphasis on preserving American traditions and values, improving the quality of life for our nation’s children, caring for veterans and their families, and teaching the fundamentals of good citizenship.

All male descendants, adopted sons and stepsons of members of The American Legion, and such male descendants of veterans who died in Service during World I, World War II, the Korean War, the Vietnam War, Lebanon, Grenada, Panama, the Persian Gulf War and the War on Terrorism, during the delimiting periods set forth in Article IV, Section 1, of the National Constitution of The American Legion, or who died subsequent to their honorable discharge from such service, shall be eligible for Membership in the Sons of The American Legion. There shall be no forms or class of membership except an active membership.

Within the 16th District there are 8 current S.A.L. Squadrons.  You can use the link below to learn more about a squadron. Or contact District Sons Liaison Robert Breitenbach, Post 364 (703)593-7711

Other helpful links about the Sons program are:

Sons of the American Legion Department of Virginia